A semi-tradition among many American Jewish families is to celebrate their children’s bar or bat mitzvahs with a trip to Israel. After several postponements due to job changes, relocations, and pandemics, we finally upheld our parently duty and brought the family to the "other" holy land, in what may have been the last chance before our now-17-year-old daughter heads off to college in 2023.

Spending north of $10,000 on 4 round trip tickets was not realistic. Fortunately, with a couple years of careful planning, the good people of Chase and Citibank were there to help us out. The Mrs. had a citi AA business card that had a signing bonus of I think 100,000 miles (?) and I got a Chase Sapphire Reserve when the 100,000 bonus was offered last year.

130,000 FlyingBlue points transferred from Chase Ultimate Rewards + $361 in taxes for 4 passengers including luggage.

We could have gotten them for 100,000 miles if we were willing to fly 2 days later, but vacation time is scarce and miles are plentiful.

KLM considers Israel part of Europe, whereas American Airlines considers it part of the Middle East, with much higher mileage requirements well beyond what was in our accounts.  So we had to fly home from somewhere in Europe.  We chose Italy, a country we love visiting and that isn’t too far from Israel.

This meant we needed to get from Israel to Italy.  We had planned to mostly visit some family friends who live in Padova (Padua), near Venice.  The best method seemed to be to buy tickets on RyanAir, the European unbundled low-fare airline.  Since the TLV-Venice flight was only on Tuesday, we instead opted to fly TLV to Bologna on Monday, which gave us 4 full days in Italy.  Ergo:

$365.38 for 4 passengers including luggage and early checkin.  We splurged for the family fare which allowed us to check bags and check in at the airport.  Without bags, it would have been about 50% less.

The originally planned return flights were on Saturday July 23, Milan > London > Phoenix > Salt Lake City on British Airways, for 100,000 AA Advantage Miles + $850 due to the ridiculous Heathrow and BA surcharges.  However the PHX-SLC leg was canceled.

As a Las Vegas bottom feeder, I have a habit / hobby / obsession of poring over Las Vegas information sources for any possible deal.  I have never been a big gambler, so I was always particularly attuned to offers that did not demand long sessions of gambling in order to obtain a reward.  Naturally, I could not help but notice that virtually all of Las Vegas' off-strip casinos dangled juicy offers to senior citizens, like 2-for-1 buffet offers, bingo promos, slot play multipliers, and the mother lode - free slot tournaments - in order to entice their golden patrons into their doors Mondays through Thursdays.  These carrots had been dangled by casino marketing departments to a greedy public via such amplifiers as Jean Scott and Scot Krause, bloggers for the Las Vegas Advisor and the American Casino Guide, respectively, and for whom I truly have the utmost respect.

R.I.P. Herb, who enabled bottom feeders to rise above the clouds

I read that Southwest Airlines co-founder Herb Kelleher passed away this past week at age 87.  Herb completely changed how Americans and indeed the world travel, by turning flying from a privilege of the rich and expense account business travelers to a transportation option that almost everyone could afford.

I remember waiting to board the very first Southwest flight I took in January 1990.  I had occasionally flown before, maybe once every 2 years or so, but this was completely different.  To begin with, Terminal 1 in Phoenix airport (now long gone) had no air conditioning, and it must have been over 105 degrees farenheit in there.  The people looked like nobody I had ever seen in an airport before, with lots of crying babies.  The boarding pass was a reusable plastic card with no seat number.  I loved it and it changed my life.

Southwest's main competition wasn't other airlines, it was driving a car or riding Greyhound.  For the first time, I could fly wearing shorts and a t-shirt without my mother telling me I had to dress nicely to get on a flight .... between Phoenix and Ontario for 19 dollars.  With the "sub-club" sticker frequent flyer system and all of the easily accessible promos tacked onto it, approximately every 4th or 5th trip was free.  It quickly became apparent that credits I accumulated on short flights back and forth to school within California could be used to fly to more exotic places like Arizona and Nevada, and eventually to Chicago! once those routes were established.  And all those drink coupons! which I couldn't use until I was 21 and even then received more than I could ever spend, but they were useful currency for trading seats.

Over time, word caught on, planes filled up, rival airlines shed costs through bankruptcies, and Southwest was the only practical nonstop carrier on a lot of short routes in the west.  The freebies became more scarce (deja vu?), and their prices increased with inflation, the cost of fuel, and that monopoly power, especially after Herb retired and they clearly focused more on returning shareholder value.  But there were always finagles for those of us willing and able to exploit them, namely the Chase credit card finagles that enable a companion pass, and frequent sales, especially when we could shift our weekends to Saturday-Tuesday.

It's easy to forget how many upstart low-fare airlines there were in the early days of deregulation because almost all of them quickly failed.  Southwest figured it out and thrived due to great management and probably a fair share of good luck.

Our family is embarking on a new challenge.  After selling our all time best investment, a home in Sacramento we bought after the crash for $74,000, we are rolling the proceeds into another home in Indio, CA which we intend to use as a vacation rental property.

We currently live in San Diego and will continue to for the foreseeable future, but real estate here is not a profitable investment.  The Coachella Valley is a natural fit for us, as Nancy and I both come from a long line of desert rats.  We met in Tucson, AZ, where I was in graduate school and she was living, and where her sister lives and we currently own 2 rental homes.  When she was a kid, Nancy used to visit her grandparents and drive their golf cart around the Cathedral City Country Club, just about a mile from where my family used to rent a condo during winter break.  My sister's family lives outside Phoenix and my parents have a home in Rancho Mirage, former and future home of Presidents and Movie Stars.

Indio is an odd place.  It's mostly a working class community that has not seen the best of times, somewhat lacking in tourist facilities such as hotels and restaurants, and whose most prominent construction project appears to be a city jail.  It is close to many resort communities, namely Indian Wells and La Quinta.  However in recent years it has shown up on the cultural map, thanks to the Coachella Valley Music and Arts Festival, which apparently attracts 250,000 people, and its country music sibling Stagecoach, located at the Empire Polo Grounds.  These two events, and to a much lesser extent the BNP Paribas Open tennis tournament in Indian Wells, cause rental prices to skyrocket for 3 weekends a year.  Indio is attempting to build on these events by billing itself the "City of Festivals" and organizing several other minor events during the year but none have the draw of these places.  In 2016, there was also a huge event called Desert Trip, featuring the Rolling Stones, Bob Dylan, the Who, Paul McCartney, and Neil Young -- a constellation of brilliant aging rockers appealing to America's most income-disposable demographic -- but that seems to have been a one-off event that was not repeated this year.

So apparently the finagle of owning a rental property in Indio is to capture the high daily rates during those 3 events in March and April, and keep it busy during the rest of the winter or rent to a Canadian snowbird from November through February.  (Unlike Americans, apparently Canadians can still afford to retire or at least take winters off, and many of them come down to the Palm Springs area.)  Then, anything you can get between May and October is gravy.  The number of vacation rentals seems to be increasing quickly so at some point it may make more sense to revert to a full-time rental. 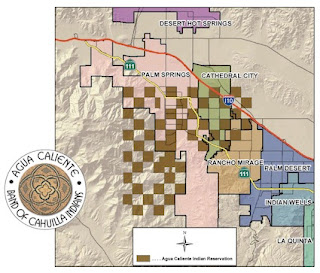 Real estate in the Coachella Valley, and around Palm Springs in particular, has the peculiar feature of being laid out in a checkerboard pattern, with land in each square alternately available to buy from the previous owner, or lease long-term from the Agua Caliente Cahuilla band of Native Americans.  Thus, many of the available properties in our price range, especially condominiums, have both an HOA and a land lease.  You can get a mortgage but the term must end at least 5 years before the end of the lease.

We weren't sure whether to buy a full-time rental or a vacation rental.  I had read a blog post on the AirDNA analytics website suggesting that Palm Springs has one of the best vacation rental markets in the country relative to the cost of investment, which made us look more at vacation properties.  While this may still be the case, after more research on AirDNA, including a paid subscription, I take their conclusions with a grain of salt.  Their estimates seem to be flawed.  For example, I met the owners of a property that AirDNA projected would have income of about $90k/year and they told me that was about twice what they actually were getting.  Another property in the area AirDNA projected $200k/year for a property with only 3 reviews.  I suspect AirDNA extrapolated those 3 peak weeks when this house was rented out to the entire year, even though it is occupied by the owners the rest of the time.

That said, we did a lot of research on where to buy all over the valley, but almost accidentally stopped at an open house that is walking distance from the Empire Polo Grounds, in the Indian Palms Country Club community and wrote an offer.  It's a beautiful 3-bedroom house built in 2005 and in mint condition.  Indian Palms is a nice, laid back gated community with a golf course, a few community pools, and a "Lifestyle Center" with a fitness center.

We will be listing this on AirBnB in the next week or two and will "soft open" by offering it at a low price initially, in order to accumulate some positive reviews.  If you are interested in staying in it, please let us know.

Our friends Ken and Martha, and their kids Alex, Abi, Andre, and Athena, are living in Huelva for the year.  Huelva is an hour west of Seville on the Atlantic coast, about 30 minutes drive from the border with Portugal.

Sleeping Saturday night for the first time in about 36 hours, we awoke at the crack of noon.  Fortunately, that was about the extent of our jet lag for the week.

We met up with our friends again at Prado San Sebastian.  When you travel with your kids and you don't go to Disneyland, you have to incorporate some of this:

Other blogs and references

Doug B.
Sacramento, CA - California, United States
I'll be writing primarily about traveling, sometimes with and sometimes without kids. I'll discuss the travel experiences as well as any tricks or (ethical) finagles to save money through experience or through my mistakes. I'm also an economist by training, electric power analyst by trade, and real estate investor by moonlight. I'll occasionally be commenting on issues of that ilk.